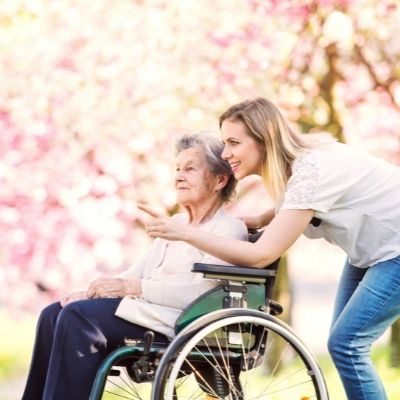 To mark 40 years of MND New South Wales this year, we are highlighting 40 years of stories from our members, staff, volunteers and experts.

Margaret has been volunteering with MND NSW for just over 18 years.

In September of 2002, her husband was diagnosed with MND. At first she thought she would have at least a few more years with him but his illness progressed quickly.

In October he was in and out of a wheelchair, by that December he was bed bound and in January the following year, he lost the use of his hands. Not long after that, sadly, he passed away.

It was an incredibly hard thing for Margaret to face and in the weeks and months that followed, the one thing that kept her going was the incredible support from everyone around her.

“I think the biggest thing that helped me was talking to people about it.”

Before being diagnosed, neither Margaret nor her husband knew anything about MND.

“We never knew a thing. We didn't even know of it. My husband, as soon as he was diagnosed, he used to meet me at the library, and he'd go through books, looking to see what it was, and what it was all about.”

Margaret decided to volunteer with MND NSW as a way to give something back to everyone who had helped her so much, during such a difficult time in her life. And it wasn’t long before she found even more like-minded people surrounding her.

“I think just being there and helping, and talking to people, you got to know other volunteers and they each told their own story. It was a nice little group.”

Margaret will never forget the help and support she received, especially soon after her husband’s diagnosis.

From loan equipment such as a wheelchair, commode or even a hospital bed to simply receiving help and advice for how to support her husband, each was invaluable to her. Which is why she feels so passionately about giving back today, to help others.

“I think the support from MND is very important, because if you don't know what you're dealing with, they can explain it and tell you all about it. Not everybody can afford to hire equipment or buy it. But at MND they help everybody and I think it's fabulous what they have there.”

In her 18 years volunteering with MND NSW, Margaret has seen quite a few things change, including advances in technology to help people living with MND. Today, if she hears of anyone newly diagnosed she knows just what to tell them.

“I say, well, join MND NSW. They'll help you along the way and explain everything.”

Volunteers like Margaret have been there for so many people over the past 40 years. Thank you for supporting us, and especially our volunteers. With your help, we are continuing to make an incredible difference to people living with Motor Neurone Disease.