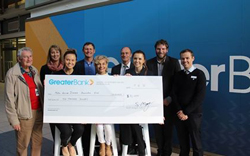 The sixth annual Newcastle Italian Film Festival was held in November 2015 and for the second year running MND NSW was chosen as the Fesitval's charity of choice. Thank you to the organiser Nick Moretti for all the hard work that goes into organising this event.